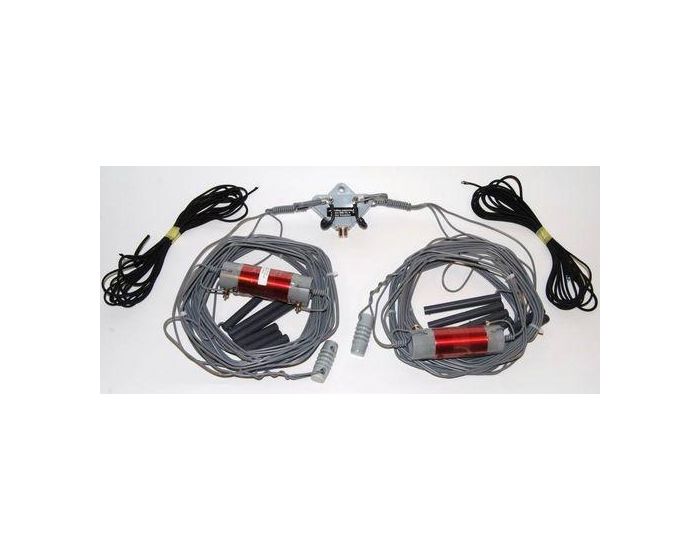 Find all of your rope, pulleys, carabiners, and guying needs here!

Due to the fact that the ALPHA DELTA DX-CC antenna approximates a half wave dipole (although greatly reduced in length), the method of mounting or installing it does not present some of the problems associated with other types of antennas. Towers, trees, wooden utility masts, etc. may all be employed as the support structure for the ALPHA DELTA DX-CC!

The DX-CC may be installed as in inverted seem flat top dipole, sloping dipole, etc. The inverted vee configuration seems to be the easiest for most amateurs to utilize. It has several benefits, such as requiring but a single central support structure for the DX-CC center insulator. Remember, though the ALPHA DELTA DX-CC was designed for compromise installations where there are space limitations. A little thought will allow the DX-CC to be installed in spaces normally thought to be too small for an antenna for these frequency bands!

Tower mounting height for the DX-CC will require some form of "stand-off" for support of the DX-CC center insulator. A spacing of 18" or more away from the tower will prove adequate.

Mounting height for the DX-CC is not overly critical. However, as with most half-wave antennas, the higher and in the clear, the better. Let the space you have available dictate the mounting height and scheme of installation. The antenna has been tested at a height of 35 ft. Lower heights may cause higher VSWR.

The introduction of your DX-CC into a tower system employing multiple guy wires or other wire antennas may cause detuning of the DX-CC antenna. This may be evidenced by a shift in the resonant frequency or increase in the minimum VSWR of the antenna. Try to keep the DX-CC as "in the clear" as possible. Installing the DX-CC so that it is in a different plane than guy wires will help, as will "breaking" the guy wires with strain insulators. For some installations, it may be necessary to employ the use of an antenna tuner to overcome this detuning situation.

The DX-CC utilizes the exclusive ALPHA DELTA ISO-RES coil principle for shortening and multibanding an antenna. The ISO-RES is not a trap, due to the fact that there isn’t a trap capacitor being used. Thus, the DX-CC is a much lower "Q" antenna than one that would be constructed using true traps! This allows the DX-CC to be broader in bandwidth than is possible with a trap-type antenna of equal size. The lower "Q" also allows the user to employ a moderate range antenna tuner (matchbox) for achieving resonance and min. SWR anywhere within the covered frequency bands.

NOTE: Some automatic antenna tuners in transceivers do not have the impedance range to tune the Model DX-CC on bands other than the covered ranges. An external wide range tuner may be required.