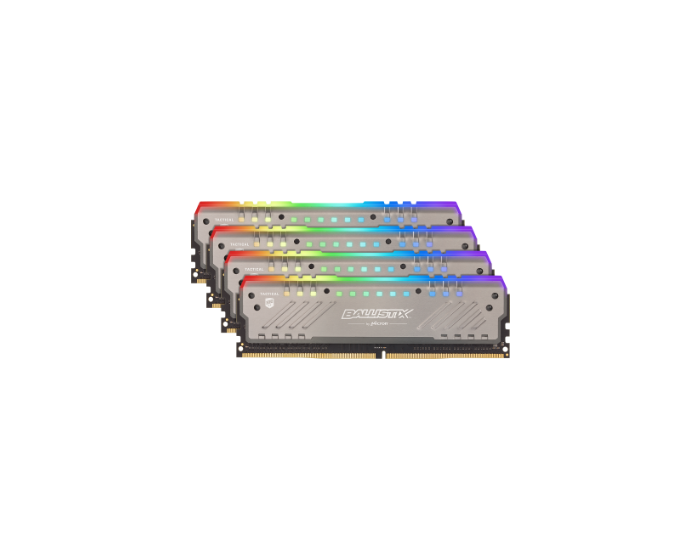 Performance isn’t enough if you want to customize your gaming rig – your system needs to stand out as you’re crushing opponents. Game at high speeds while firing up Ballistix Tactical Tracer RGB DDR4 gaming memory modules that match your system’s color scheme with RGB LEDs and deliver all the features of the Ballistix Tactical series like XMP profiles, stylish black PCB, and custom heat spreaders.

Customize your rig with prismatic LEDs
With 16 LEDs in 8 zones built into the top edge of every Tracer module’s design, Tactical Tracer RGB DDR4 modules light up your rig’s color scheme and other components. Adjust LED colors and brightness, turn them on and off, switch up display patterns on the fly, or sync your memory’s lights with other components using your motherboard’s provided software.

Modify your memory’s look like never before
Take your system’s look even further with different light bar options. The choice is yours!

See how your memory is running at any moment with the detailed system information that the Ballistix M.O.D. (Memory Overview Display) Utility provides. Designed exclusively for high-end Ballistix modules, the M.O.D. Utility is a free downloadable tool that works with Microsoft® Windows®-based systems. Play full throttle while gathering intel on memory speed and temperature via an integrated thermal sensor, then use this info to enhance your performance.

Accelerate your game in style
Get faster speeds and more aggression with speeds up to 3000 MT/s. Burst towards the top of leaderboards and knock out opponents with module densities up to 16GB and kit densities up to 64GB.

Micron quality: Pro gamer reliability
As the only major brand of gaming memory that’s built and tested from start to finish as part of a major DRAM manufacturer, Ballistix delivers a higher level of performance than standard PC memory. For more than 35 years, we’ve engineered old-school DDR memory all the way to Ballistix DDR4 modules, which deliver the performance that pro eSports players rely on to win. Backed by a limited lifetime warranty, a hardcore community of fans, and a dedicated gamer support team, Ballistix memory is ready to take your in-game performance to the next level.