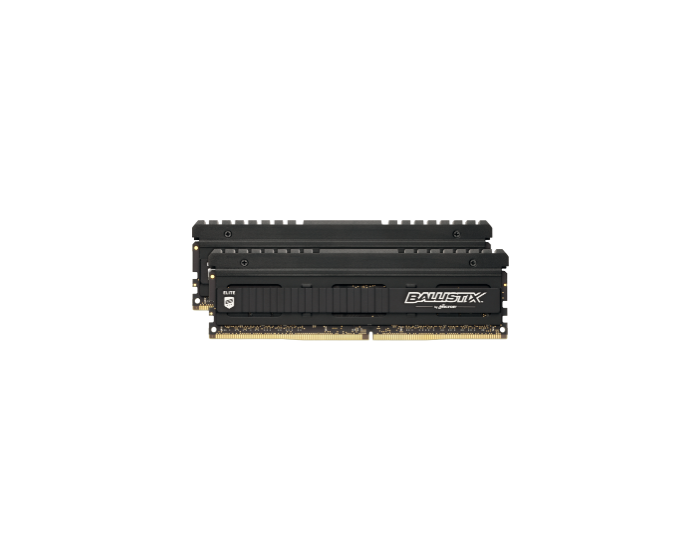 To max out performance in the final days of DDR3 technology, you needed the right processor, the right motherboard, a PhD in overclocking, and the willingness to surrender everything in your wallet. Not anymore. Feed your multi-cores and draw upon some of the fastest speeds and bandwidths available with Ballistix Elite DDR4 memory.

Outplay. Open fire with advanced speeds.
While your opponents fight petty with slower DDR3 memory, obliterate them with DDR4 speeds starting at 2666 MT/s. Alongside these speed gains, draw on the improved responsiveness, increased frame rates, and optimized latencies of Ballistix Elite DDR4 technology and revel in an unreal gaming experience.

Outmatch. Overpower the opposition with radically increased bandwidth.
Flood your memory bandwidth and process more gigabytes per second at rates that are nearly impossible to achieve with DDR3 memory. Leveraging the faster burst access speeds that are only possible on DDR4 architecture, Ballistix Elite DDR4 maximizes performance with four channel memory.

Outwork. Push your memory to the edge – using less power
Ballistix Elite DDR4 memory leverages the latest advancements in efficiency technology and is engineered to run at lower voltages for inherent energy gains. Armed with a thermal sensor and our high-end Ballistix M.O.D. Utility for real-time temperature monitoring, Ballistix Elite DDR4 wrings up to 40% more power efficiency out of your memory.

As the only major gaming brand that's built and tested from start to finish as part of a major memory manufacturer, Ballistix DRAM delivers a higher level of performance than regular PC gaming memory. For more than 35 years, we've engineered old-school DDR memory all the way to Ballistix DDR4 modules, which empower the future of gaming performance. Backed by competitive warranties, a hardcore community of fans, and a dedicated gamer support team, Ballistix memory is ready to take your in-game performance to the next level.

Features
Reviews
Write Your Own Review
Only registered users can write reviews. Please Sign in or create an account