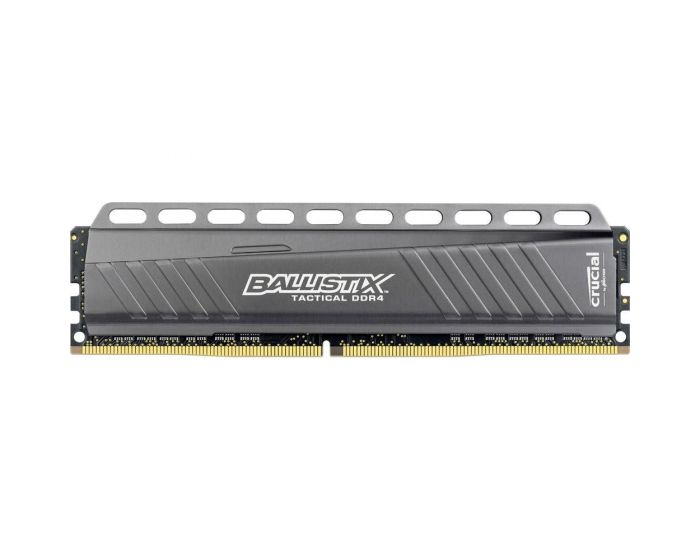 Your weapon of choice
Winners and losers are often separated by fractions of a second. You pull the trigger first, and you win. That's how it works when you're using Crucial Ballistix Tactical DDR4 memory.

Engineered to deliver explosive speeds and lower latencies, Ballistix Tactical DDR4 is a big step up from standard gaming memory and allows you to strike first, faster, and more frequently than the opposition.

Strike fast
Overwhelm your opponents by doing more in less time. Standard PC memory is often only able to handle up to 12.3 GB/s before succumbing to bandwidth restrictions. Ballistix Tactical destroys this limitation and throttles up to 21.3 GB/s through the memory bus.

Speeds start at 2666 MT/s
Faster speeds and timings than Ballistix Sport DDR4
Four channel memory architecture maximizes data rates
Gunmetal gray heat spreader with black PCB
Certified Intel® XMP 2.0 profiles for easy setup
Optimized for the latest Intel X99 platforms
Limited lifetime warranty1
Micron® quality — a higher level of reliability. As a brand of Micron, one of the largest memory manufacturers in the world, Ballistix memory is built to last and delivers a higher level of performance than standard PC memory. For more than 35 years, we've engineered old-school DDR memory all the way to Ballistix Tactical DDR4, which unleashes a new performance edge. Backed by a limited lifetime warranty and rigorously tested to some of the most demanding standards, Ballistix Tactical memory is ready to make an immediate impact in your system.
Reviews
Write Your Own Review
Only registered users can write reviews. Please Sign in or create an account