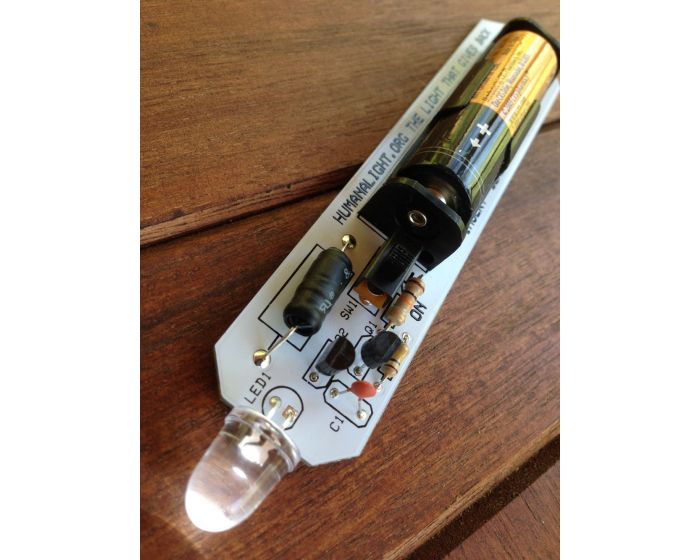 Skip to the beginning of the images gallery
Overview
The ETOW HUMANALIGHT
Listen and Learn: It’s ETOW’s tagline, but it’s also a commitment we at ETOW have made to those we serve.
We’ve been doing just that, and we’ve learned how important the little LED lamp on our self-powered radios is, especially to communities that live largely or entirely off-grid.
So we’ve chanced upon a bright idea: an easy-to-build kit for a bright, long-lasting LED mini-lamp that’s powered by a surprising, but ubiquitous, resource: the residual energy in depleted AA batteries.
The finished devices used in the field are built mostly from recycled parts for an environmentally light footprint, can be sold and the profits reinvested in local schools, health clinics, and other crucial services.
Materials and Tools Required: Note:
The orientation of the LED, transistors, and battery holder are printed on the HumanaLight circuit board.
The instructions for assembling the ETOW HUMANA LIGHT KIT can be found on the ETOW website: http://www.earstoourworld.org/humanalight/
Reviews
Write Your Own Review
Only registered users can write reviews. Please Sign in or create an account