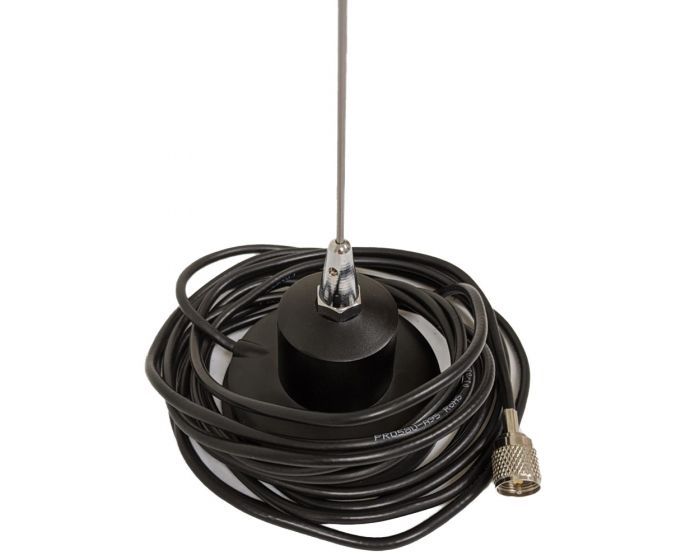 You shouldn't have to sacrifice your transmitting ability just because you don't want to put a hole in the roof of your truck!  The Shark 2M58 is the perfect compromise that doesn't compromise!

The 2M58 comes in at a full 5/8λ, making it the optimal length for a VHF antenna. The 5/8λ flattens out the radiation pattern much like stepping on a donut, compressing your signal, and letting you reach stations you just can't reach with traditional 1/4λ mag-mount antennas.

Add to that the 2M58 has a full 48" whip made of American steel, and it can take the bends and beatings of low hanging branches and other obstacles in a way your stationary hard-mounted antenna just can't!

The strong 3.5"  magnet base is tough, and can hold on to your antenna at highway speeds with no problem!  But the antenna's base is also made to be able to be gently removed when you need to pull the antenna inside of your locked vehicle; such as when you're parking downtown or have to go somewhere with the YL.

Also, the 2M58 doesn't leave you stuck at 50W.  This antenna is rated for 500W!  Use this antenna without ever having to worry about what rating or what radio you can use with it.

Coming with 15' of quality RG-8X coax, and terminated with a PL-259 connector, this antenna is a great solution for your 2M, 70CM and even 6M needs.

Finally, a mag-mount antenna that cuts through the noise!

NOTE: We have seen in some installations it may need the stinger cut for 6m and 70cm setups.