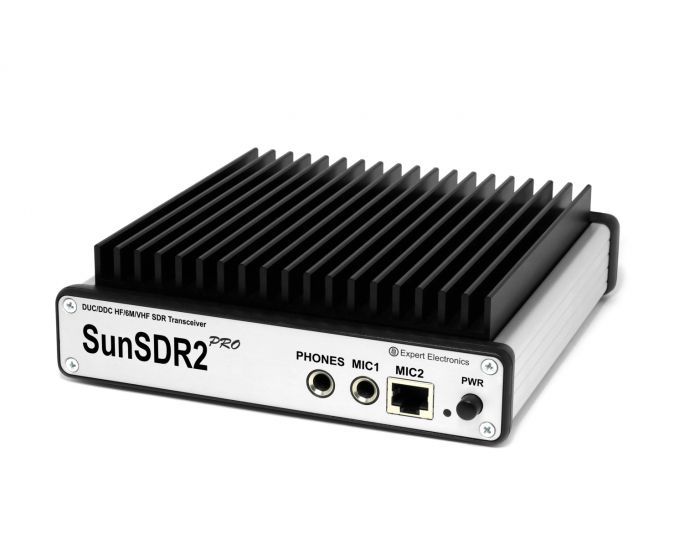 The SunSDR2 PRO transceiver was designed for advanced operation on HF and VHF bands, even the most demanding operator will be surprised by its capabilities. Modern hardware along with the ExpertSDR2 software makes this high-performance SDR transceiver the perfect base station and at the same time perfectly suitable for field operations.

Independent RX path based on DDC (Direct Down-Conversion) architecture
Independent TX path based on DUC (Direct Up-Conversion) architecture
2 software RXs + SubRX for each of them (4 slices total) + independent wideband Bandscope up to 80 MHz
Remote control operation, using it, you connect PTT and CW-key to the E-Coder panel. Microphone and E-Coder are connected to the remotely set up PC
TCI interface for seamless connection with third-party software, the list of software with TCI support
Professional TX processing module provides the most advanced tuning capability for voice operation
ExtCTRL connector to control external devices with 8 powerful keys with open collector
ALC connector for external power amplifiers*
Supports use of VHF transverters**
An opportunity to use the transceiver as a signal generator via DAC OUT connector (SMA connector)
An opportunity to use external filters in the middle of the RF path, using ADC IN and RX OUT (SMA connector)
Small delay in CW mode (about 10 ms)
Input for external 10 MHz reference oscillator
An opportunity to use the transceiver in SO2V mode
Full duplex or half duplex modes***
Antenna switch with 2 HF antenna connectors and separate VHF antenna connector (Mini UHF connectors)
Internal power-meter for HF and VHF bands and SWR-meter for HF band
Ethernet LAN interface provides fast and reliable connection to PC
* ** *** These functions are supported by the transceiver's hardware, but is not implemented in the ExpertSDR2 software. They will be supported in the future ExpertSDR2 software releases.

The main improvements in SunSDR2 PRO in comparison to SunSDR2

High-speed ADC LTC2209 instead of LTM9001CV-BA, as a result, the transceiver has a higher dynamic range - 129...130 dB instead of 118-120 dB in SunSDR2. It allows you to work with enabled preamp +10 dB alongside strong АМ stations within the octave filters bandwidth, which is very important for 20M, 17M, 15M, with low air noise level and good propagation. The receiver is almost impossible to overload.
LPFs in the power amplifier was increased to 5th order, instead of 3rd.
Improved antenna switch, idle connectors shorted on the case. It eliminates crosstalk from HF antennas while working on the VHF band and vice versa.
BNC antenna connectors were replaced with more reliable mini-UHF.
Improved HF crosstalk protection on all connectors: PTT, CW, MIC.
Added diode protection to ExtCTRL keys. Voltage output +12...+15 V now goes via 1 А fuse and polarity reversal protection on the ExtCTRL connector instead of 5 V.
Improved heatsink - it is a single detail instead of multilayer construction as before.
Improved PCB board - transistors and VHF path are placed in the PCB space with the shortest outputs. Improved PCB structure, added layers from 4 to 6.
And a lot of other small improvements.
SunSDR2 PRO transceiver is optimized for mass production with improvements, which were implemented after 5 years of manufacturing and extensive usage of the SunSDR2.

Reviews 1
Write Your Own Review
Only registered users can write reviews. Please Sign in or create an account