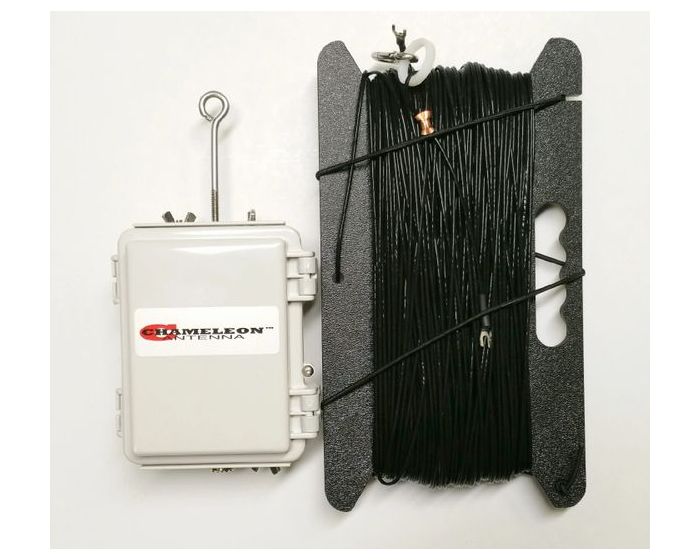 The CHA SKYLOOP 2.0 is an extreme performance horizontal full-wave loop antenna. The main advantages of a horizontal loop antenna are reduced background noise and a better gain over a dipole—which means signals will be stronger. In fact, most operators can’t believe the increase in performance over their old dipole antenna. The antenna is comprised of 265 feet of wire, insulators, and a matching transformer unit. The integral broadband impedance matching network transformer allows broadband antenna tuning. The antenna will operate from 3.5 - 54 MHz (including 80m – 6m amateur bands) without any adjustment with a wide range antenna tuner.

With the help of an antenna tuner the CHA SKYLOOP 2.0 will cover all the bands between 80M and 6M included.

Even if the antenna can be installed at a minimum of 10' above ground the antenna should be ideally installed at least 30' to 40' off the ground for maximum performance. The antenna will be suspended by four evenly spaced support points.

The main advantages of a sky loop are the reduced background noise and a better gain over a dipole. A minimum coax length of 25' of RG-8X (or better) is recommended.

The skyloop can be attached to poles, trees, buildings and whatever is convenient. It is best of course to try to avoid running it with a leg parallel to nearby power lines.

The skyloop is an efficient antenna omni-directional over most real earth and exhibits a good signal-to-noise ratio.

The antenna operates on all bands (harmonics) above the design or fundamental frequency.

Successful local and DX operation can be made when the antenna is elevated at least 20' above ground but the higher the better.

The larger the area or aperture inside the loop the better.

Usually the skyloop will perform about 80% to 90% better than a G5RV or dipole at the same elevation.

Occasionally a DX station might fall into one of the nulls (as frequency increases, a loop will have nice gain lobes but also corresponding sharp nulls).

The skyloop ignores a lot of both manmade and natural noise while still reaching out and grabbing RF signals effectively.

The gain of the skyloop at its fundamental frequency is approximately 1.8 dB over a dipole.