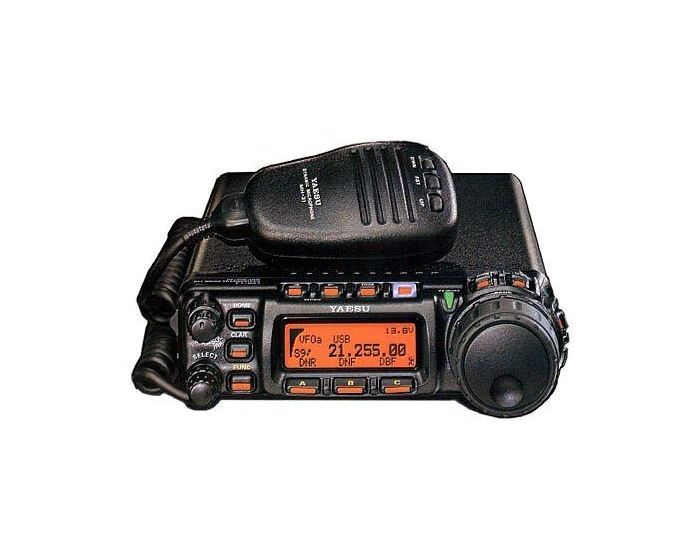 This setup does not include the YSK-857D separation kit

Ultra Compact Design
Measuring just 6.1” x 2” x 9.2”, the FT-857 is the world’s smallest HF/VHF/UHF up to 100W multimode transceiver! Its rugged case design is a masterpiece of ergonomic design, with often-used switches and knobs conveniently positioned for easy access.

High-Performance Receiver Design
Building on the acclaimed performance of the FT-1000D, Mark-V FT-1000MP, and FT-897, Yaesu’s engineers have crafted the FT-857’s front end for a very low noise floor, along with wide dynamic range. Utilizing an up-conversion architecture for HF with a first IF of 68.33 MHz, the FT-857 features a double-conversion superheterodyne system (triple conversion on FM), with the 2nd IF at 10.7 MHz. Extensive bandpass filtering in the front end, along with careful device selection and gain distribution, yield a receiver system ready for the strong-signal challenges of today’s crowded bands!

Wide Frequency Coverage
Providing transmitter coverage of the HF, 50 MHz, 144 MHz, and 430 MHz Amateur bands, the FT-857 also includes receive coverage on 100 kHz to 56 MHz, 76 to 108 MHz, 118-164 MHz, and 420-470 MHz. Enjoy the excitement of public safety monitoring, along with weather broadcasts, AM and FM broadcasts, aviation communications, as well as the action on the Ham bands!

Versatile Memory System
The FT-857 provides up to 200 “Main” memory channels, each of which may be named with an Alpha-Numeric label of up to eight characters. These 200 Memories may be separated into as many as 10 Memory Groups of 20 Memories each. For added convenience, you also get a “Quick Memory” and a “Home Channel” on each band, plus ten pairs of band-limit memories, to let you restrict operation to a sub-band, if you like.

Big Radio Tuning Dial and Outstanding Ergonomics
Ease of operation of the FT-857 is enhanced by the large-diameter (1.7”) Main Tuning Dial, similar in size to the tuning knob of many base station rigs. Selectable tuning steps of 2 kHz/4 kHz per revolution allow easy navigation around your favorite bands, while important keys and switches are strategically placed around the front panel for quick access.