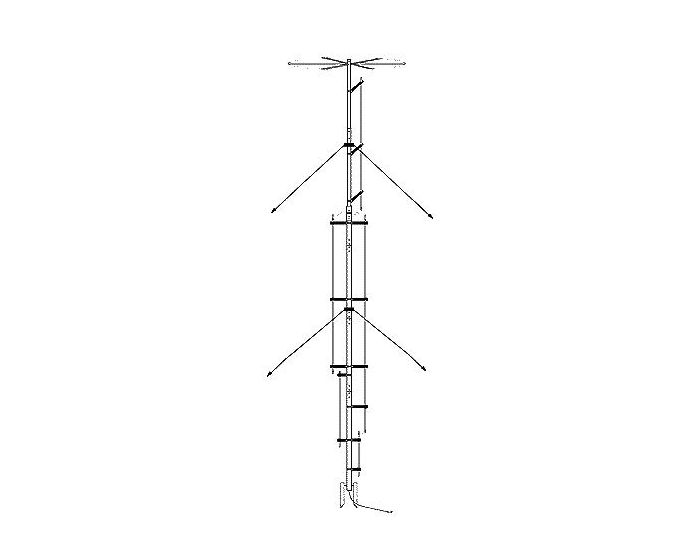 The GAP Voyager DX-IV incorporates the identical unique technology as in the Challenger DX-VIII to “open up” the low bands. Emphasis was given to 160m and 80m when designing the Voyager, because of the difficulties these bands create and the lack of previous technology to overcome them. Unlike the Challenger, the Voyager employs a capacity hat with circular ring to reduce the physical height to 45 ft. while maintaining an electrical height of 66 ft. A capacity hat is the most efficient way to reduce height, maintain band width and eliminate corona. As an integral part of the design, GAP technology uses parallel tuner rods to perform a number of functions, one of which is on 40m. They create a vertical dipole for increased low angle gain. Unlike the trap multiband antenna, the voyager utilizes the entire antenna on all bands. For those who detest the need to “alter” purchased antennas, no tuning or matching is required to put the Voyager on the air. If you have always wanted to operate the low bands, go for DXCC on 80m or WAS on 160m, now with Voyager, you can. If you want to work CW on 3.55 and SSB at 3.95 or switch to 20m and work a JA, now you can — without a tuner.

QUIET PLEASE! Noise is the unwanted companion of verticals — particularly on the low bands. The Voyager, like all GAP verticals, is a “quiet” antenna primarily due to a sleeved feedline and the use of a counterpoise. GAP Antennas eliminate the deployment of thousands of feet of radial wires “parallel to” the power lines which transfer power line noise.
Specifications
Reviews
Write Your Own Review
Only registered users can write reviews. Please Sign in or create an account