Discontinued - Consider the DIY option below! 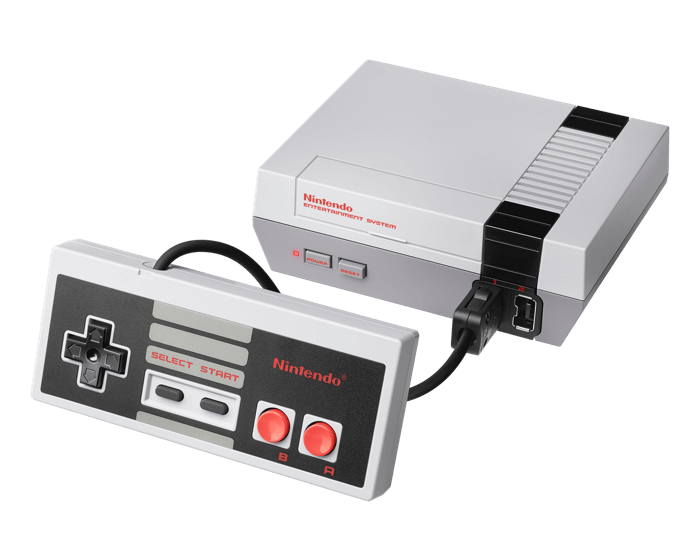 Tired of searching or waiting for the NES Classic? Why not build your own?

Here's what you need:

Nintendo Entertainment System: NES Classic Edition. From your first Goomba stomp to your thousandth victory in Final Fantasy, the Nintendo Entertainment System may just be the most nostalgic gaming console ever. And now, a new, miniaturized version is here, pre-loaded with 30 of the all-time greatest games, including The Legend of Zelda, Super Mario Bros. 3, and Mega Man 2. Just plug it in....and play. The system comes bundled with an HDMI cable, an AC adapter, one NES Classic Controller, and all 30 games, installed and ready-to-play.

PLAY THE SYSTEM THAT STARTED IT ALL
Remember your first Goomba stomp?

The NES Classic Edition system is a miniaturized version of the groundbreaking NES, originally released in 1985.

Just plug the NES Classic Edition into your TV, pick up that gray controller, and rediscover the joy of NES games.

Play NES games the way they're meant to be played—with a full-size "original" controller.

The included NES Classic Controller can also be used with NES Virtual Console games on your Wii™ or Wii U™ console by connecting it to a Wii Remote™ controller.

2P, PRESS START
Share the fun with a friend
Games like Pac-Man™, TECMO BOWL, and Dr. Mario™ are even better with a buddy. And you won’t have to fight over a controller.

PLUS THESE FUN FEATURES
Save your game with Suspend Points
Pick up right where you left off with four Suspend Point slots for each game. Just press the Reset button while playing to return to the HOME menu and save your progress to a slot. Have a perfect run going? You can lock your save file and resume at a later time so there's no danger of losing your progress.

Choose your look with Display Modes
CRT filter: Looks like an old TV, scan lines and all.
4:3: Gives you the original NES game look, with a slight horizontal stretch.
Pixel Perfect: Each pixel is a perfect square, so you see the games exactly as designed.