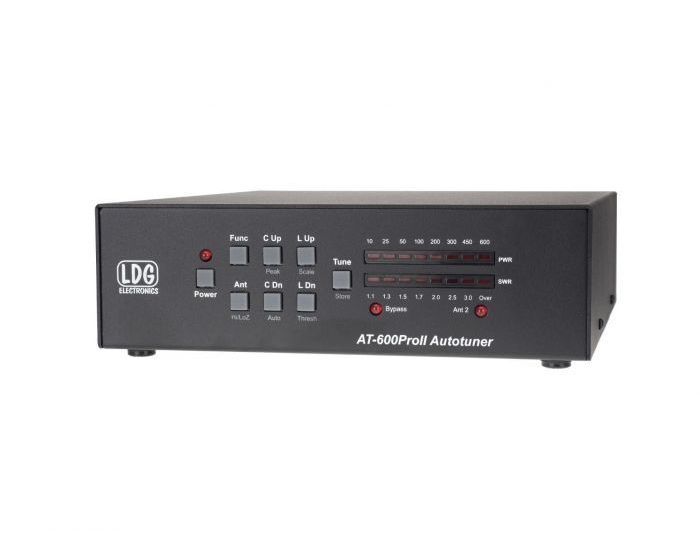 The LDG AT-600ProII is a general purpose automatic tuner intended for use with midsize amplifiers with up to 600 watts output on SSB or CW.

Like all LDG tuners the AT-600ProII operates automatically, beginning a tuning cycle whenever the SWR exceeds a preset limit. To protect its circuitry it will not tune at power levels above 150 watts; you simply bypass your amplifier (or place it in Standby) to complete a tuning cycle using only the exciter. The AT-600ProII also features LDG’s advanced memory tuning, providing 2,000 memory locations; when tuning near a previously used frequency it will recall the settings for nearly instant tuning. It learns your favorite frequencies and bands as you use it. You can also start a tuning cycle manually whenever necessary.

The AT-600ProII has a large, easy to read bar-graph wattmeter that show forward and reverse power with two selectable ranges (60 and 600 watts), as well as an SWR meter. The optional M-600 4.5" analog meter shows forward power (60 and 600 watt scales), reverse power, or SWR in peak or average mode. The AT-600ProII will interface with many popular transceivers so you can start a tuning cycle with the radio’s TUNE button. Dedicated control buttons on the tuner allow you to fine-tune capacitance and inductance on those rare occasions when the AT-600ProII can’t find a perfect match by itself.

The AT-600ProII features two output connectors so you can easily switch between two antennas. There are 2,000 memory locations for each antenna, allowing nearly instant returning on frequencies you’ve used before.

The AT-600ProII will tune from 1.8 to 54.0 MHz continuously, and will match Yagis, dipoles, inverted-Vs, slopers, or virtually any coax-fed antenna from 6 to 1000 ohms impedance (16 – 150 ohms on 6 meters). Tuning time is usually under 10 seconds; memory tuning time is under 0.2 seconds. Longwires or antennas fed with ladder line require an external balun, not included.